Greetings, friends! We are celebrating the 80th Birthday of the one and only Super-Hero, Captain America. Created by Joe Simon and Jack Kirby and first appearing in Captain America Comics #1 in March 1941 back when Marvel went by the name, Timely Comics. Steve Rogers is the epitome of America's patriot and his shield is one of the most recognizable weapons in the history of comics and acts as an important symbol for the character. We have seen our hero featured in countless and memorable story lines and films that are already considered classics! For this weeks release, we are featuring the cover art for Captain America's Bicentennial Battles by Jack Kirby and Frank Giacoia. Released as a fine art Giclee and printed on acid-free paper with archival inks and comes in a Limited Edition of only 100! 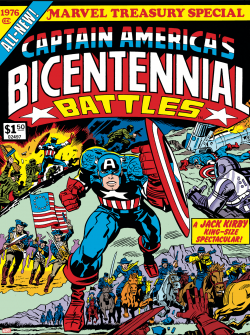