Dunno how I feel about the variant, most likely will grab it though.
Last edited: Aug 9, 2016
Reactions: bigballas01, Alistair G and bluray hunter
B

Not what I expected tbh pretty cool though

regular FTW ... only saving grace to that variant would be it having metallics and the reg not. Course all a matter of taste, but I got a Florey Robin Hood and its amazing. His colors are always like such and I think its great for his style.

Wreck said:
regular FTW ... only saving grace to that variant would be it having metallics and the reg not. Course all a matter of taste, but I got a Florey Robin Hood and its amazing. His colors are always like such and I think its great for his style.
Click to expand...

Reg here too. Wish I had the space for a tonne more prints

Or at least the room for a flat file

search for Snap Frames in 24x36 until you find a right price you like. Then changing prints is so easy without taking frame off wall. Then you could go the portfolio route and stick it under bed .... OR the cheap route ... the sandwich route.

Many poster collectors do this.

buy acid free foam board at hobby shop in size bigger then posters you plan to store.

then sandwich the prints in that and use those big black file clips to keep slight pressure on the foam boards. The Sandwich method ... then stick that under a bed. OUt of sight out of mind until you want to enjoy or put a new print up in the snap frame.

Course the hardcore guys got flat files ... @roseart has more than a few.

cooey said:
@Wreck Yeah but then I'll have even less money than I have now haha
Click to expand...

There is that problem tho!
Reactions: cooey

This looks great! I definitely prefer the colours of the reg over the variant. I don't think I need another guardians print though..

GotG has gotten some of the best prints of any movie in recent memory. This is another awesome one. Going to have to refrain from buying with movie #2 coming up, surely there will be even more awesome releases for GotG. And agreed with you fella's above... reg colors FTW.

Received this print yesterday! *_* Such a gorgeous thing!
Reactions: Wreck

Now that all fires burning in the Australian state of New South Wales have been declared contained for the first time this season, the time to start rebuilding and helping really starts. According to The Associated Press, it is recorded that the fires took at least 33 lives and destroyed more than 3,000 homes and burned more than 26 million acres.

It is estimated that more than 1 billion mammals, birds, and reptiles likely lost their lives in the blazes. Around 25,000 Koalas were feared dead on Kangaroo Island and approximately 8,000, a third of all the population in New South Wales, are believed to have perished. A wildlife ecologist at Deakin University said some ecosystems would be able to recover in a few years, others would take decades, and some more than a century.

When we heard of all the devastation and loss to this beautiful country, we wanted to do whatever we could to help. So, we reached out and enlisted the help of our Australian artist and friend, Florey. We wanted to take something we knew fans and collectors of his have enjoyed and decided to put a little twist on it for this special release. For the first time ever, we are re-releasing Florey's beloved and long sold-out Guardians of the Galaxy poster but now as a beautiful Holo Foil Variant with a portion of the proceeds going to Wildlife Victoria! We are so excited that we can create a fun poster and at the same time use it to help a really great cause. 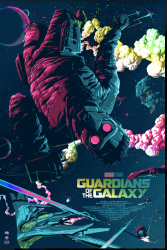 Vice Press The Thing by Florey

Bottleneck Gallery Lord of the Rings By Florey