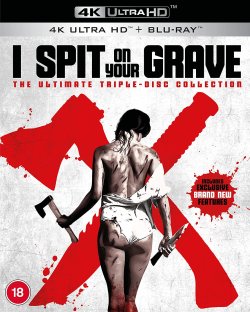 I SPIT ON YOUR GRAVE, the film that infamously changed the face of cinema forever, is back for the first time in stunning 4K Ultra HD as part of a premium 3-disc Collector’s Edition boxset, packed with incredible bonus features totalling seven hours of content.

Re-experience the original controversial hit I SPIT ON YOUR GRAVE in 4K UHD and Blu-ray, a cult phenomenon that influenced an entire genre and generation of filmmakers, with audio commentaries by director Meir Zarchi and critic Joe Bob Briggs, and brand-new specially commissioned interviews from film historian Chris Poggiali and lead actress Camille Keaton.

Also included is the official feature documentary GROWING UP WITH I SPIT ON YOUR GRAVE on Blu-Ray. A must-see for fans of the series and horror films alike, uncover the fascinating history of the classic that shocked and divided the world as told by Terry Zarchi (son of the franchise creator) with behind-the-scenes footage and exclusive interviews.

If its completely uncut, which will be a first for the UK, them I'm in. Otherwise it's a pass. Interested to see what the set looks like though
Reactions: goufcustom and sinusR2

Wonder if it'll be the same RoninFlix remaster or something new. The former was pretty good.
Show hidden low quality content