MacGruber is back in a new original series coming to Peacock in 2021, starring and executive produced by Will Forte! 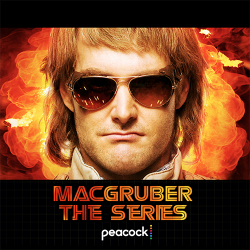 Oh wow! CULT COMEDY right there I am still waiting for a premium for this but I doubt that will ever happen

Will Forte, Kristen Wiig, and Ryan Phillippe will all be reprising their roles from the movie, and it was announced today that the MacGruber series will also star Sam Elliott, Laurence Fishburne, and Mickey Rourke. Elliott will play Perry, MacGruber's father. Though they've drifted apart over the years, MacGruber will need his father's sage guidance if he hopes to succeed in his latest mission. Fishburne will play General Barrett Fasoose, a highly decorated soldier who commands the respect of the entire U.S. military who also happens to be married to MacGruber's ex-wife, Vicki St. Elmo (Wiig). As for Rourke, he'll play Brigadier Commander Enos Queeth, one of MacGruber's mortal enemies who was long thought dead, only to resurface in order to carry out a heinous plot to destroy the world, and in the process, claim his revenge against MacGruber.

Not familiar with this at all. But with Mickey Rourke on board doing comedy ... I'm in !