It’s because his films resonate with us. They burrow their way into our minds like few movies can. Their stories are rich, their characters well-drawn, and they’re dense with themes that provoke discussion and thought, particularly with regard to issues of class. But, perhaps most amazingly of all, his films accomplish all of these things while also being wildly entertaining, genre masterpieces. And nowhere is this more true than in his greatest work (so far): PARASITE. If you haven’t seen the film yet, we recommend fixing that immediately.

PARASITE is an incredibly relevant, defining, and boundary-breaking film by a director whom we completely adore. The film is universally recognized as brilliant, and it lives up to the hype. Couple that with Rory Kurtz, one of the best poster illustrators currently working, and the result pretty much breaks our brains.

“There’s a lot to unpack in Bong Joon Ho's PARASITE. It asks many questions and doesn’t give us comforting answers. For the poster, I wanted to capture that sense of discomfort and unease. A seemingly picture-perfect moment between the happily rich Parks completely oblivious to what’s unfolding around them, and the Kim family relegated to the shadows struggling with their own complex feelings toward such wealth and privilege. It’s a timely film, groundbreaking for a handful of reasons, and difficult to define. My hope is the poster art is just as mesmerizing and ambiguous as the film itself.”
– Rory Kurtz

We're excited to have been able to pair the two together, and to offer PARASITE as a Timed Edition release starting this Thursday at 11AM on The Drop, as well as a limited edition Korean variant. 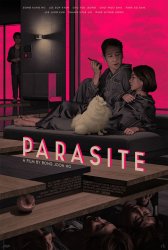 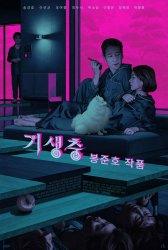 Amazing art. Wouldn't it be cool if Plain Archive used one of the posters for a slip? They worked with Rory Kurtz before ("I, Tonya") and a "Parasite" premium would be most welcome. Either variant would be fine with me (as always, I can't decide which one I like better).