If it's anything like the Black Widow release then this isn't going to be a Digipak. But I do hope I'm wrong.
Reactions: jc2ssych
S

Wondering if you can help me....point me in the right direction.
Does Hi Def Ninja have a Group Buy for a Generic HMV UK type of thing where you can put in requests, since they do not ship to US?
I thought I have seen in the past but I am not finding now when I look for.

Much appreciated.
Thank you

@staplehead If I wasn't checking this thread randomly, I could have missed your post. If you want to tag someone, start typing the @ symbol and follow it directly with the first 3-4 letters of their name, you'll be presented with a drop-down window like below and you can select the person in question. 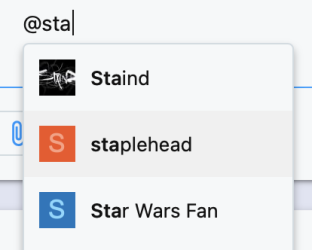 As for your query, we don't have such a group buy anymore, however we do have many friendly members who would be willing to offer to help when you post in the relevant threads. First ones that come to mind are @lenticularis and @steelmybeatingheart , of course depends on the person's availability etc...
Reactions: Lenny Nero, steelmybeatingheart and lenticularis

@IRON MAN How do you think we should call and categorize these slips with a fold-out front, because this is a third such Target release after Black Widow and Free Guy. Safe to say they've stopped doing digipacks.
Paramount has a series of releases like that in the US, called Paramount Presents, though I don't think they have a pocket for the cards.
I think it should go into regular Amaray section, just with a Target Exclusive badge, or something, so it's still visible as a more special release.
Show hidden low quality content