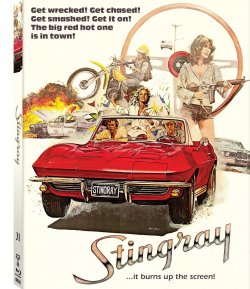 The BIGGEST single edition Dark Force release of the YEAR just got BIGGER! The new Blu-ray BD50 of the 1978 action comedy STINGRAY will have a limited edition "COLLECTOR'S CUSTOM SLIPCOVER" in stunning 3D emboss with spot UV gloss highlights! The disc will include the biggest extras ever included on a Dark Force release and the feature is the "never seen before" DIRECTOR'S CUT which was cut down by Avco Embassy to a PG rating for the US theatrical release. We will show you more on this incredible looking custom slip as our production people work their magic on it.

Same, never heard of this film (or Dark Force) but that slip sounds like it's going to be stunning. Cool artwork too.....
Reactions: Space Cadet

Few beers with friends and pop corn and this might go down well.

Looks like a movie that would be a drive-in double feature with CORVETTE SUMMER.

Slipcover A Place in the Sun (Blu-ray Slipcover) [USA]