Lionsgate is currently in the midst of developing this John Wick TV series.

The show is currently going by the title The Continental, and will focus on the network of assassins that’s become a key part of the John Wick mythology. Stahelski further teased that the prequel show will follow a variety of characters, not John Wick:

“They’ve got a really good structure. It’s very tied to the film [in that] it’s about the Continentals all over the world, how certain people come into that world, and what happens in relation to those people, which is cool. I think the world is very vast, and everything I’ve heard from it is very positive. […] It’s something that studio seems very, very intent on [making] and very, very behind… You can be with the consigliere, concierge, the sommelier — you can be with all these different characters and walk through the world in different aspects; ones that I’m a little limited [from exploring] by staying with my lead guy.”

Stahelski says he thinks the plan is for Keanu Reeves to make an appearance in the series, but the show won’t be about John Wick.

F**K YEAH! This is AWESOME news!

What about a series for Christopher Walken's The Continental? 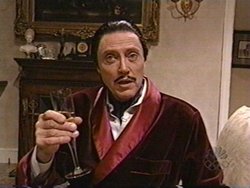 C.C. 95 said:
What about a series for Christopher Walken's The Continental?

Surprisingly they will take place in the same universe! He tries to seduce John Wick.
Reactions: navydavey and C.C. 95

kaw said:
Surprisingly they will take place in the same universe! He tries to seduce John Wick.
Click to expand...

Thanks for the tag

Starz President & CEO Chris Albrecht announced today at the Television Critics Association (TCA) Winter 2018 Press Tour that Starz and Lionsgate are developing a television series adaptation of the highly successful Lionsgate film franchise John Wick. The Continental series will be set in the John Wick universe, focusing on the inner workings of the exclusive Continental Hotel which serves as a refuge for assassins.

Collins expands the universe in the series by focusing on the Continental Hotel and those who find refuge under its roof. Set in a hyper-real version of Los Angeles, the series maintains the urgency of the action along with the dry humor from the John Wick movies. Drawing upon the collaborative efforts of Lionsgate’s film, television and Starz platforms, The Continental continues the growth of a franchise that has already generated two hit films that have grossed nearly $300 million at the worldwide box office and a successful virtual reality mobile game.

“This series is truly unlike anything else on TV,” said Albrecht. “’The Continental’ promises to include the thunderous fight sequences and intensely staged shootouts between professional assassins and their targets that fans have come to expect in the John Wick movie franchise as well as introducing some new, darkly compelling characters who inhabit this underground world.”
Click to expand... EXCLUSIVE: Mel Gibson has been set to star in The Continental, the prequel to the Keanu Reeves film series John Wick. The Continental will be presented as a three-night special-event TV series, pro… Colin Woodell (The Flight Attendant) has been tapped as the lead in The Continental, Starz’s TV series prequel to the Keanu Reeves film franchise John Wick. Woodell, who will play Winston Sco…