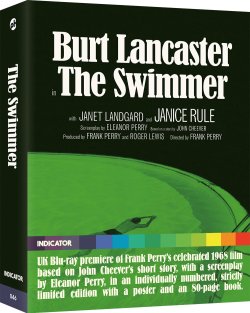 One of the few bona fide counter-cultural films to be produced by a major studio, The Swimmer is a sun-scorched and surreal suburban satire that boasts a fine performance from Burt Lancaster (Castle Keep, Buffalo Bill and the Indians) as Ned Merrill, the all-American man who one day determines to swim home to his Connecticut mansion via a series of pools in his neighbourhood.


All extras subject to change