We're back for our third annual Give-Away! Bloodsnake007 and I are here to give you a chance to win an epic prize. Up for grabs this year is Beats by Dre powerbeats3 Wireless In-Ear Headphones (Black)

Both of us appreciate all the support from everyone here to help put this event together.


We wouldn't want to do this at any other forum! We want to thank @Wreck, @digitalbabe, @apsmith21, @tridon, @PunkNinja and all the HDN members! 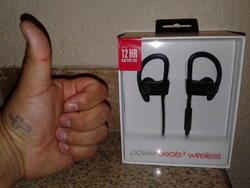 2. FREE SHIPPING WITHIN THE U.S ONLY

3. WINNER WILL BE ANNOUNCED ON February 26th

Tell us about your best or worst concert experience. It can be short or long, just have fun with it! If you haven't been to a concert, you can post your favorite motion picture soundtrack.

Seeing Brand New in concert was amazing huge part of my growing up and seeing them live was insane
Reactions: bloodsnake007 and MGD

​
This Give-Away will end Sunday at 12pm Eastern.

I will then forward the list of participates to my partner in crime Franky (Bloodsnake) and he'll be in charge of picking the winner.


Be sure to check back Sunday night! #Bestweekever

Thanks for the awesome giveaway guys

fun question too.. I'll be reading the posts

A long long long time ago when the foo fighters did their first tour in the uk.. I went with a few friends and we're standing in the centre of the mosh pit as the the band is about to start their first track and somehow as soon as the music started people were jumping and everyone went down.. me, my sister and our friend were at the bottom of a pile of bodies (so many people were down and piled up over us it was pretty scary.. must have been 1-150) when people finally got off my face I could see a little bit of what was going on

a guy tried to help me up but couldn't cos there were too many people over me, then I saw my friend.. she had managed to get up and went total tank girl on all the guys that were crushing me and my sister.. she was grabbing guys by anything she could get her hands on

, just picking them up left and right... forget tank girl it was more like the hulk

we were lucky we weren't hurt.. good thing about rock gigs is, if someone goes down you help them up even if you don't know them.. but that's usually a few at a time not the whole of the lower floor at once.

Another gig I went to, me and my friend were in the mosh pit (the only two girls in it) and the guys kept getting annoyed at us cos we were being too rough

.. so we went and got a drink then jumped right back in.. that was a funny night.. we didn't know anything about the band when we went to see them, after the first half of the set the band went off stage and came back on completely naked and did the second half of their set nude

Best concert experience would have to be when my best friend and I saw Jimmy Eat World in a small cocert venue in Hamilton, ON.
We were fairly close to the stage and some guy kept yelling at them to play one of their earlier obscure songs... the band was having none of it and finally told the guy to stop b/c it wasn't going to happen... so then after their next song that guy yells out "Play Stairway To Heaven" the band quickly and harshly said "No" and it went silent for a split second and without missing a beat my best friend yells out "NO STAIRWAY... DENIED!" Everyone looked over towards us including the band, smiles abound by the Waynes World reference I pointed towards him yelling out "YES!" The band gave him a nod and the rest of the show was fantastic.
Reactions: bloodsnake007 and MGD

I was planning to take my son to his first concert- Bon Jovi in Charlotte, NC in 2010. He was 7 and "Wanted Dead or Alive" was his favorite song (I think they used in Scooby Doo 2: Monsters Unleashed). We get to the arena, get our tickets scanned, grab a drink at concessions, and proceed to our seats (along with my wife and sister). We sit down about 25 minutes before the opening act comes on stage. He looks at me and says, "Dad, I don't feel good. Think I might throw up." So he does. Twice. In the seats. So we have to leave the concert before it starts! Then he proceeds to throw up in the back seat of my 3 week old new car three times on the way home. I have to stop to buy supplies to clean him up, as well as the car. He wakes up the next morning, says he's fine and we head off to school. After reimbursing my sister for her ticket, I'm out $420 and have a car that smells like puke for two weeks (even after having it cleaned professionally.

The best and worst happened the same night. I went to the last Pearl jam concert at the iconic Philadelphia Spectrum and I had no idea what was going to happen. As the night progressed, I start feeling a little under the weather and terrible symptoms come on. By the end of the night, I want to die. turns out that I contracted the Swine Flu and was hospitalised. Totally worth seeing PJ bring down one of my favorite concert venues.
Reactions: MGD and bloodsnake007

My favorite concert experience was in 2004 probably sitting 4th row at an Alicia Keys concert directly in front of where she was playing on her piano. She looked straight at me singing for about 3 or 4 seconds. Song was so good, I forgot it was real life and she was really looking at me. Great concert!
Reactions: MGD and bloodsnake007

My worst concert going experience in recent memory was at a Story of the Year show last year. My girlfriend and I arrived early, got a great parking space, grabbed our drinks, and went to find a great spot about 45 minutes before the first band started. The opening act rolled out and delivered a solid show, the second act upped the ante, and just as the main band was about to take the stage, two ladies around 6' tall each, forced their way from nowhere in front of us. We waited for them to move but they didn't, instead they decided to tell us they'd been in that slot all night, which is obviously a lie. The whole event played out like an episode of Seinfield; a question of common unspoken ethics and etiquette blatantly being disregarded. And just like Jerry and company, we did not back down. Instead we kept the pettiness alive. Finally they got angry with us and left, but we won that night. Just like Jerry would have wanted.

Thanks for the giveaway! These posts are hilarious!
Reactions: MGD and bloodsnake007

Bump for my buddies @bloodsnake007 and @MGD

Thanks for this great giveaway!

My favorite concert was from the Jazzfäst Tour by Die Ärzte in 2008. It was an open air concert and I went there with a couple of friends.
All of Germany was like a single rain cloud, but at the concert was bright sunshine.
It was like a one day festival with 4(?) opening bands and went on for hours.
Reactions: bloodsnake007 and MGD

Back in high school my best friend and his older brother took me to a James Brown concert. James was in his 60's at the time, so it wasn't like he was in his prime years, but all i remember was how fast and agile he still was at his age. Everything was on point, the band, dancers and James had the house rocking. I know what they mean when they say James was a perfectionist when it came to his shows. I will cherish that experience forever.

My favorite soundtrack is from Hobbit.

Thanks for this awesome giveaway!

Greatest experience was in 1994 at the Roskilde festival in Denmark. Lots of great bands, but Van Halen ended it all with a massive audience of 90.000 people. I remember Sammy Hagar had a laughing fit when someone hung a blow-up doll from a pole just above his head during a song

Apollon said:
Bump for my buddies @bloodsnake007 and @MGD

Back in high school my best friend and his older brother took me to a James Brown concert. James was in his 60's at the time, so it wasn't like he was in his prime years, but all i remember was how fast and agile he still was at his age. Everything was on point, the band, dancers and James had the house rocking. I know what they mean when they say James was a perfectionist when it came to his shows. I will cherish that experience forever.

@MGD Since my partner in crime posted his, I'll do the same!

In 2010 I finally got to sit and enjoy a concert of my favorite band in the world, MANA!

(They're a Mexican Rock Band).
What made it an experience to remember was that Alyssa bought the tickets months before and surprised the hell out of me!

I just know that'll be another EPIC night!

Worst experience was being rained out, falling in a foul dirty portaloo and losing skin off my feet from them being soaked for 2 days.
Reactions: MGD and bloodsnake007

I was in a mosh pit, and someone must have thrown something into the air (I think a water bottle or something). Security dragged me out and questioned me in the back room. Said they were gonna kick me out. Told them I didn't do whatever it was they thought I did. I missed almost 30 minutes of the concert. Lame.
Reactions: MGD and bloodsnake007
Show hidden low quality content