As recently announced Funko Games released a bunch of holiday games in time for the Halloween and Christmas season. The games range from a new Funkoverse The Nightmare Before Christmas game as well as a few standalone games. The people at Funko Games were kind enough to send over a copy of both Disney’s Haunted Mansion – Call of the Spirits and Elf – Snowball Showdown for us to take a closer look at. 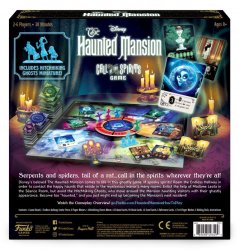 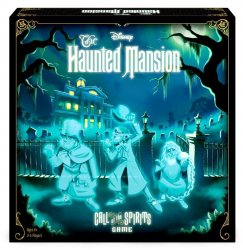 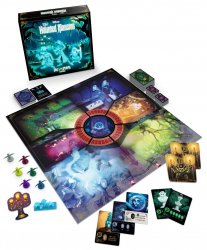 The first game we will look at is Disney’s Haunted Mansion – Call of the Spirits. Based on the ride at the Disney theme parks players take turns exploring the different rooms of the haunted mansion, encountering ghosts, and collecting them. The player with the most points at the end of the game wins.

Before getting into gameplay and overall impressions I’ll first be taking a look at the design and packaging. The box itself shows off the outside of the haunted mansion in a very stylized manner and features the haunting ghosts (more on them later) with a nice glossy effect. The inside of the box cover has a pretty nice wall and ceiling effect which while not used in the game does add a bit more detailing to the overall product which I personally appreciated and letting it sit well on a shelf. Likewise the outer edge of the lower half of the box features different portraits, again not relevant to the game but still appreciated. The board itself folds out to show off the mansion from the outside complete with a creepy gate, graveyard, and fog. The playing side of the board is divided into six rooms (Crypt, Ballroom, Dinning Room, Attic, Graveyard, and Mausoleums) while the spinning inner circle of the board has the Endless Hallway and Séance room which are the main focus of the game. The cards and duel trackers are also beautifully illustrated.

Onto the gameplay itself, like the infographics on the box indicate the game does play in approximately 30 to 45 minutes (allow a bit more time your first time playing to explain the rules) and is played over a number of rounds determined by the number of players. Each round is broken into two phases the event phase and the action phase. Throughout the game players take turns going to different rooms and collecting sets of ghost cards while trying to avoid taking any haunt cards which negatively affects your points at the end of the game.

In the event phase a new round card is drawn. When this happens the haunting ghosts move to different rooms in the mansion based on what the card says. Players take haunt cards if the haunting ghosts either passed a room they were in or land in a room with a player and then new ghost cards that players want to collect are then placed on the board. Each round card also has a condition which is read aloud. Play then moves to the event phase.

In the action phase players take turns performing actions in order to collect ghost cards that were placed on the board during the event phase. These actions include moving around the hallway or even rotating it to quickly get to a room that has a card you want to collect. Players can also use their turn dueling another player ghost cards they had collected or going back to the séance room to discard any amassed haunt cards. Play continues until each player gets a turn in the action phase at which point the round ends and a new round begins starting at the event phase.

The goal is for players to collect sets of cards as the more similar type cards you collect the more points they can give you at the end of the game. However amassing the highest total of haunt points will cause players to discard all the cards from the set they collected the most from so players do want to avoid the haunting ghosts or use actions to remove any amassed haunt cards.

Haunted Mansion was a fairly simple game to pick up and explaining how to score points to any level of player whether they are an adult or child is straightforward and easy. As mentioned above it stayed within the 30 to 45 minute range which I felt was perfect for a short game or for families with kids and it doesn’t take long to set up or put away. Thematically it fits with the premise of the ride and mirrors that by wandering around a haunted mansion and exploring rooms filled with ghosts in them. When playing the game I enjoyed figuring out which sets I wanted to collect and risk getting haunt cards for and how to use my three actions.

If there was one criticism I have of the game it would be with regards to the dueling system. In my play through we didn’t utilize the dueling mechanic to take ghost cards away from other players at all. There were always plenty of ghost cards to choose from on the board itself and with only three actions per turn it felt unnecessary to move to a room with another player to duel them and potentially take more haunt cards to get a card from another player. If there were fewer ghosts placed during the event phase this might have prompted more dueling throughout the game as there would be a greater need to get cards from other players. In a three player game six cards are coming out per turn giving each player plenty of ghosts to pick up whereas in a six player game there would only be nine ghosts making it a tighter race to collect ghosts in a turn and probably promotes more dueling throughout the game.

Overall I think for the more gamer crowd this would fall a bit short but for fans of the Disney ride or for those looking for a quick family game that doesn’t take a lot of time to set up or play this is a good game for you. 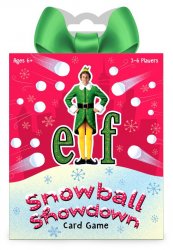 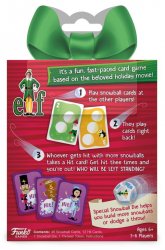 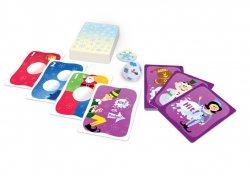 Next up is a very quick ‘stocking stuffer’ game Elf – Snowball Showdown.

At a $6.99 price tag this and Funko’s other Christmas game releases are perfect ‘stocking stuffer’ gifts. The Elf game was fun even for adults and brings back the nostalgia of the snowball fight in the movie. This is another quick play game that is easy to pick up and play with the family and spend 20 to 30 minutes throwing snowballs at each other without having to actually step outside. To make things move a bit quicker you can limit the number of people that re-roll the die after a dodge but the game still plays fast enough without having to do that.