Disney+ has announced Monsters at Work, an animated spinoff series scheduled to debut in 2020. Monsters, Inc. stars John Goodman and Billy Crystal will reprise their roles as Sully and Mike Wazowski for the new streaming series.

Monsters at Work picks up six months after the original movie with the power plant at its center now harvesting the laughter of children to fuel the city of Monstropolis. The series follows Tylor Tuskmon (Ben Feldman), an eager and talented mechanic on the Monsters, Inc. Facilities Team who dreams of working on the Laugh Floor alongside Mike and Sulley.

Disney has revealed a first look at Monsters at Work, the upcoming Disney+ animated show that will spin off Pixar’s Oscar-winning Monsters, Inc. into a new expanded series following a young monster just trying to climb the corporate ladder with however many arms it takes.

Ben Feldman (Superstore) plays Tylor Tuskmon, an eager mechanic at Monsters, Inc. who dreams of moving from the facilities department to the Laugh Floor to work alongside his Monstropolis idols Mike and Sulley (who will be played by original cast members Billy Crystal and John Goodman, reprising their roles from the 2001 film). Take a peek at Tyler here, as seen for the first time in a painted rendering Feldman shared Wednesday on social media.

“This show is crazy fun & I’m so hyped to have finagled my way into the [Disney] fam,” Feldman wrote, adding, “also if I’m not really your thing, Mike & Sulley from the other Monsters movies are back too so relax.”


The 2020-targeted series (developed and executive-produced by Bobs Gannaway) picks up six months after the original movie’s story, with the Monsters, Inc. power plant now harvesting the laughter of children to fuel the city of Monstropolis — thanks to Mike and Sulley’s discovery that laughter generates ten times more energy than screams. 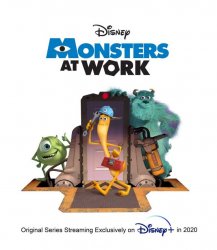 Captain America 4 - In the Works