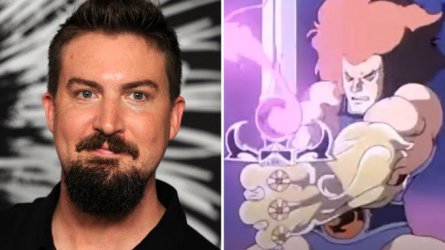 EXCLUSIVE: As his new film Godzilla vs. Kong opens Wednesday in U.S. theaters and on HBO Max after turning up a Hollywood film pandemic record $123 million gross in 38 overseas markets over the weekend, director Adam Wingard is set to direct ThunderCats. That is a big-scale feature based on an animated TV series that ran from 1985-89 by Rankin Bass, and several other iterations, comic books and merchandise.

The project had been developed by Rideback’s Dan Lin and Vertigo’s Roy Lee (they were producers on the Wingard-directed Death Note), with an early script by David Coggeshall. Wingard will rewrite a script with Simon Barrett, and will turn all this into a hybrid of CGI and animation. The series focuses on a group of cat-like humanoid aliens who live on the dying planet Thundera. The ThunderCats are force to flee their homeland.
Reactions: tridon and DADDYCOOL187

Live action could be interesting if done right
Reactions: Robles

I'm worried about this. It could end up being a disaster like 'Cats'
Reactions: DADDYCOOL187 and harry

thanks for the tag @harry
loved the cartoon series as a kid
Reactions: harry

thanks for the tag @harry
loved the cartoon series as a kid
Click to expand...

so easy to do a movie ...similar to gotg
Reactions: DADDYCOOL187 and harry

so easy to do a movie ...similar to gotg
Click to expand...

This will be right up my street

Absolutely loved this as a child, probably a little bit too much

Damn I had everything they brought out for this, Action figures, weapons, the lot

Anyway, yeah Im pretty excited about this and just hope that it's done right

Thanks for the tag @harry

Now I know what your avatar is

Even though I don’t know anything about Thundercats, I’m really interested in this movie project cuz I like Adam Wingard’s films except Death Note

I shared this on my personal Facebook, but I'll repost it here...

Last weekend, as I was sitting online during the HorrorHound Film Festival waiting for my short film The Next Room to appear, there was a brief interview right beforehand with Adam Wingard, director of Godzilla vs. Kong. My brother and I were watching and I said to him, “Adam is a super cool guy — and such a great director!” My brother agreed and said, “Maybe you guys can make a movie together one day.” I nodded, replying, “Yeah! Maybe I’ll write ThunderCats and he can direct. We’re the same age. I bet he loved that show, too!”

Cut to today, a little over a week later, and here’s an announcement that Warner Bros. has brought Adam onboard to direct a ThunderCats film. WHAT?! I’m a mother-f**king profit!

I’ve wanted a ThunderCats film for nearly my entire life. Every Saturday morning growing up consisted of me lining up all of my ThunderCats action figures in front of the family's giant tube TV to watch a new episode with my favourite cast of characters. In high school, I'd print ThunderCats t-shirts in my art class and I began drafting a ThunderCats screenplay (in the end, it turned out to be more of a 100+ page film outline, but it was still pretty bad-ass).

Yeah, the film won’t be live-action (looks like they’re going the CGI/animated route similar to what Spider-Man: Into the Spider-Verse did), but according to Adam, it’s a direct continuation of the original animated series, so it doesn’t come much more perfect than that for me (though there will need to be some major exposition in order to ensure the general audience isn't confused like they were when Superman Returns came out). It's also cool to learn that Adam wrote his own ThunderCats screenplay when he was in high school, so it's funny to see that we're in the same boat in that regard (though he said he never really became a fan until he was in high school).

And yeah, I won’t be writing -- not this time around, anyway -- but Adam’s regular cohort Simon Barrett is taking charge there, so the ThunderCats are in really, REALLY great hands. I can’t wait to see my ‘Cats kick some mutant ass once again. HOOOOOO!!!

@tridon Loved it too as a kid so am looking forward to seeing what they come up with here. And I'm sure you meant prophet.

IRON MAN said:
@tridon Loved it too as a kid so am looking forward to seeing what they come up with here. And I'm sure you meant prophet.

Yeah, I meant prophet, but hell, I'd make Warner quite the profit, too.
Reactions: IRON MAN

tridon said:
Yeah, I meant prophet, but hell, I'd make Warner quite the profit, too.
Click to expand...

Next MonsterVerse Movie - In the Works

The Last Manhunt - In theaters TBA